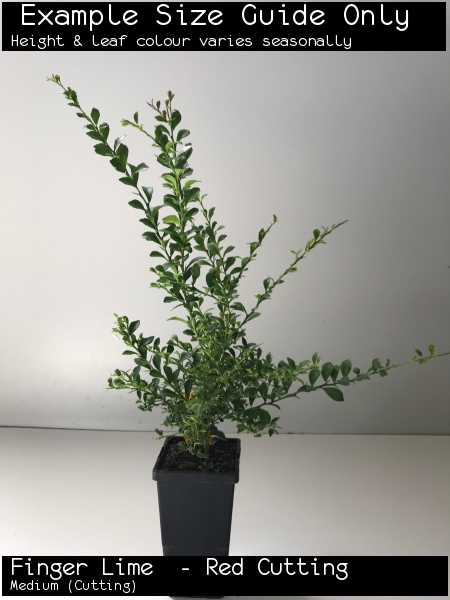 Red fruited cutting grown selection. The fruit contains an acid juice similar to that of a lime. A delicate rainforest tree that offers a distinctive citrus flavour to sweet or savoury dishes. The juicy cells, similar in appearance to caviar, are a delightful surprise in salad dressings. A rainforest tree that naturally occurs as an understory tree in SE Queensland and Northern NSW.

Can be pruned to 2m

Should I cover these with shade cloth to protect them during summer? We live at avoca beach, about an hour north of Sydney. Cheers, Justin morrow From: AVOCA BEACH NSW

The tree will grow fine in full sun however when the fruit is setting the fruit itself can be susceptible to sunburn and having shade cloth can help with this and make sure that the fruit looks great and doesn't have any blemishes from sunburn. Since harvest period is late summer to september it would only be a problem for your first fruit if you get a really hot patch. So likely more trouble than it's worth.

Tree Information on growing, planting, pruning, maintenance, ripening, taste, pick or bonsai tips. But mainly how to grow a Finger Lime - Red Cutting Share Your Advice or ask questions on our Forum