The Casimiroa or white sapote as it is also known is native to the  Mexican highlands and Central America.  It is a pleasurable tasting fruit reminiscent of vanilla custard mixed with creamy banana and peaches. Although often called a white sapote it is not a member of the sapote family. The yellowy-green skinned fruit has white flesh and is used primarily as a dessert fruit.

The trees have a very appealing drooping habit with long branches that can almost touch the ground.  They are fast growing with two main spurts, once in early spring and again in early autumn.  Casimiroa trees fruit prolifically and a healthy mature tree can produce 1000 fruit per year.  They are also long lived and can crop for 100 years or more.  Fruits should be picked when they are just beginning to soften and change colour from green to yellow, if picked too soon they are astringent.  Do not plant close to paths or buildings as they can have troublesome root systems. 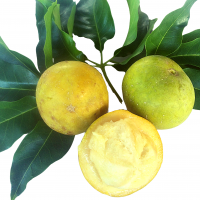 A hardy fast growing fruit tree producing an abundant crop of fruit that taste like a creamy pear and banana combined. 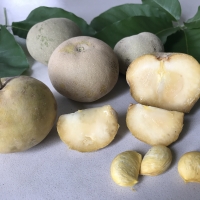 A self pollinating selection with a compact form and thicker skinned fruits than normal.  It is the preferred selection of a rare fruit grower in Bundaberg 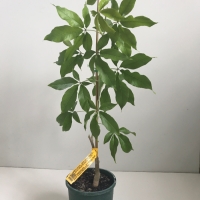 The fruits are large, elongated and oval in shape. The flesh is a deep yellow with a particularly rich, aromatic flavour and few seeds. 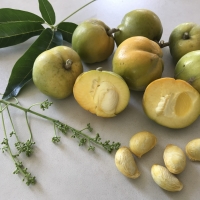 Reinecke Commercial is an irregular shaped fruit with attractive golden-orange skin when ripe and few seeds. The fruit is large and flat with a good strong flavour. A popular commercial variety due to its excellent storage and ripening qualities. SP

A heavy cropping tree producing a medium sized fruit with a mild flavour, uniform in shape and good appearance. Casimiroa fruit is reminiscent of vanilla custard mixed with creamy banana and pear. 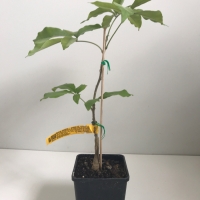 This selection is from Nth Qld with excellent flavour and texture. Chris bears so heavily that it may require pruning to minimize limb breakages. The tree itself seems to always look a bit stressed but the bottom line is it's a good producer. 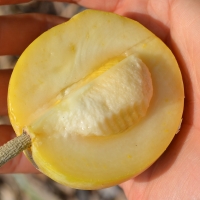 Yellow skinned, sweet mild flavour, average size. Due to its perfect flowers this is an ideal pollinator for other varieties. Also called Casimiroa, this is a very hardy, prolific fruiting tree for the subtropics. Will crop even in temperate climates.

Pike is often seen in commercial plantings. The large fruits remain green when ripe and have a bitter skin, however the flavour is superior to most other introduced varieties.

The flesh is pale yellow with a delicious spicy tang, the fruits are elongated and have a slight bumpy texture

Tree Information on growing, planting, pruning, maintenance, ripening, taste, pick or bonsai tips. But mainly how to grow a White Sapote Share Your Review & Advice or ask questions on our Forum

This variety at least, should show a "Fruiting/Harvest Months" season of from October or Nov or Dec to April or May, for Sydney, especially for a mature tree ie after the tree has been growing many years eg about 10 to 15. | R. - Sydney, NSW 10-Oct-2019

Frost knocked them back to rootstock, but after being transplanted to a frost free spot, they are doing great. Growing well in shallow clay soil, with frequent droughts and no irrigation. Very drought tolerant. No fruit yet, five years on. | Dave Price - Nanango, QLD 28-Jun-2010

Seeds of white sapote are used in Mexico as a herbal medicine to lower blood pressure. Pharmacologically-active chemicals have been isolated from them and tested in laboratory animals. Consequently they appear to be potentially poisonous if eaten. | Ross Mckenzie - Brisbane, QLD 02-Mar-2009

The seeds are supposed to be a narcotic if your dog eats them he'll probaly be triping | Paul Dixon - Condong, NSW 06-Jul-2008

Warning. The seed of the white sapote is fatally toxic. We had a very sick golden retriever who ate a fruit and crunched into one of the seeds. Fortunately she threw up what she had eaten and is OK. An edible fruit with toxic seeds! You need to warn peopl | Roz Hart - Shenton Park, WA 04-Mar-2008

Spray with a diluted mixture made from BORAX .This will help fruit set,i also do this with my Avacardo and at this time i have an abundance of fruit forming on both trees | Gerwal Gheese - Modbury, SA 03-Nov-2007

A tea made from the chopped up green leaves and drunk before going to bed can give restful sleep and cheaper than sleeping tablets | Ron Briggs - Grafton , NSW 05-Jul-2007